Does Your State Have What it Takes to Survive a Zombie Apocalypse? 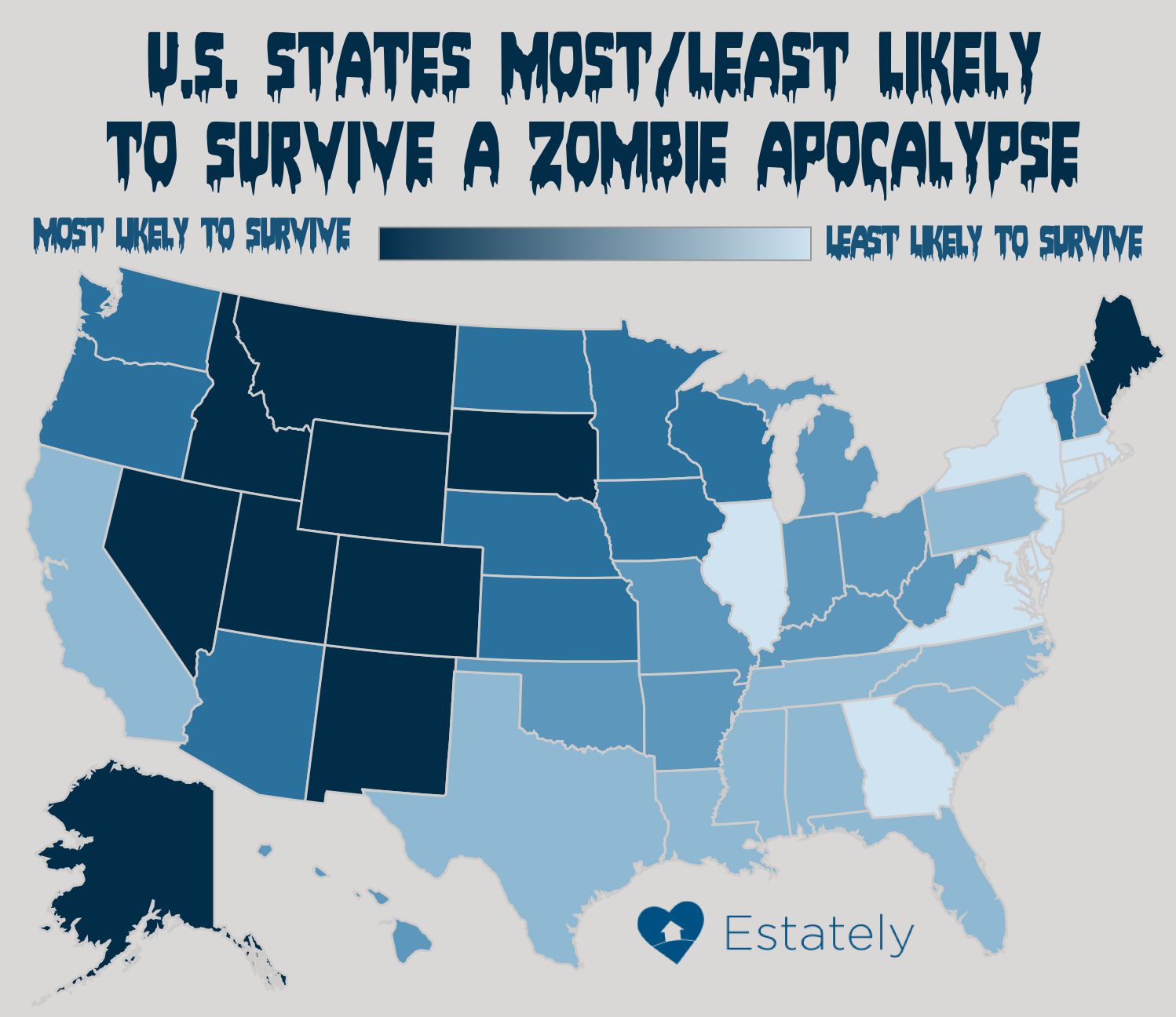 There are so many factors to consider when choosing where to buy a home—average home price, proximity to work, and obviously the odds of surviving a zombie apocalypse. That’s why Estately Real Estate Search mapped out which states are the safest to live in if an army of the undead were to suddenly rise from their graves in search of brains to eat. To do this, we ranked each U.S. state from 1-50 using the following five criteria, and then averaged the results to create our final ranking.

In the end, Alaska is the best equipped to fend off the zombie menace, whereas New York is destined to be an all-you-can-eat brain buffet. The Mountain West, Great Plains and Pacific Northwest appear to be the safest regions of the country, and the South and Atlantic Coast are in serious trouble. Below, we’ve profiled the five states most and least likely to survive.

FIVE STATES MOST LIKELY TO SURVIVE

Alaska is a zombie’s worst nightmare, and not just because they could be eaten by wolves and bears, but also because there are miles between potential brain snacks, and the majority of people own guns and know how to use them.

Home to a plethora of doomsday preppers and survivalists, much of Idaho has been sitting around daydreaming about this moment for their entire lives. Look, they didn’t fortify that shed in their mom’s backyard and stock it full of provisions for nothing, okay? A zombie apocalypse justifies all of this.

Montanans don’t take kindly to strangers ’round these parts, especially ones that stagger around moaning about how they want to eat your brains.

During a zombie apocalypse, the average Wyoming resident would spend his/her days watching The Walking Dead reruns on the couch, and using the commercial breaks as an opportunity to shoot zombies lumbering across the prairie from the open window.

South Dakotans look forward to only a few days a year—the day the Sturgis Motorcycle Rally ends, Czech Days, and any day they get to kill zombies.

Knowing full well Maryland doesn’t stand a chance against a zombie apocalypse, the good brewers at National Bohemian already have commercials prepared advertising how well their beer goes w/ human brains. If you can’t beat them, you might as well become the official beer of the zombie apocalypse.

You think New Jersey traffic is bad already, just imagine how it’ll be when everyone in the most crowded state in America suddenly jumps in their cars and simultaneously tries to drive to Maine.

Given Virginia residents’ almost complete lack of interest in zombie movies and shows, it’s likely that when a brain-hungry zombie arrives at the door, the homeowner will just assume it’s an out-of-season tick-or-treater, and that’s going to end really badly.

Sorry, Rhode Island, the Eastern Seaboard is no place for those looking to escape the undead. However, if it plays its cards right it, could very well become the capital of Zombie America.

Once a zombie outbreak starts in New York City, it won’t take but a New York minute to spread to the rest of the state. Buffalo will hold out until the bitter end, but that’s just how Buffalo rolls.