Costume Ideas Each State Googles More Than Any Other State 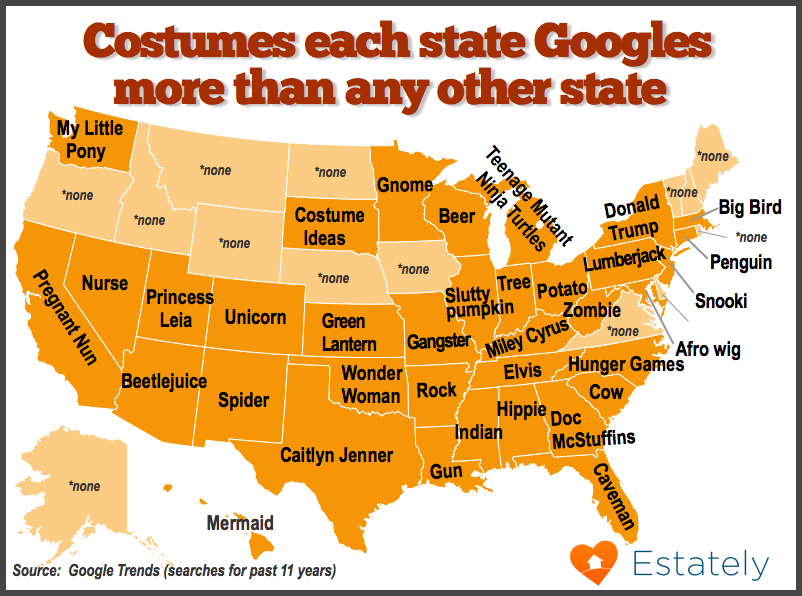 When it comes to choosing what to dress up for Halloween, America’s 50 states definitely go about things differently. Internet users in some states hardly search online for costumes at all, while others are clearly spending hours searching for the perfect costume. To track America’s geographical costume preferences Estately Home Search used 11 years of Google Trends data to see what costumes users in each state search for more than users in any other state.

Will this information help you decide where to live and buy a home? Maybe not, but the results were interesting. Overall we learned the Mountain West, Great Plains, and Northeast had little interest in costumes, while states like Utah and New Jersey cast wide nets in their search for a costume.

Below we’ve compiled a list of all the costumes in our search and paired them with the state that searched for that costume more than any other. We’ve also included some highly subjective analyses of each state’s costume-related search history.

Trick-or-treating is a pain in a state with the lowest population density in the country. It’s simply too much trouble to get dressed up if you can only hit a couple of houses.

How is Katy Perry going to choose between Beetlejuice or Buzz Lightyear?

So awkward when you agree to dress up like a rock as part of a group costume, but then scissors and paper fail to come trick-or-treating with you.

What California lacks in water it makes up for in abundant costume searches. Unfortunately, a high percentage of them are racist as hell.

Most of these costumes are probably just for costumed 1/2 marathons.

But is it the adorable Antarctic creature or Batman’s nemesis?

No need to Google how to write “COSTUME” in Sharpie on a white T-shirt because that’s what you wore last year as well.

By Florida standards this is a really tame list, even with the strippers and pimps.

There is a stark contrast between Georgia and its neighbor to the south.

Hawaiians are both crafty and aquatic in their costuming.

Maybe instead of wearing costumes they just put people clothes on the sheep and feed?

Bold choice for a state that was once completely forested.

Utah came in first for practically every superhero, but Kansas has some crazy love for the Green Lantern

Halloween is pretty farm-themed in Kentucky.

If blondes really do have more fun then how come everyone in Maryland is buying afro wigs?

If you ever see a group of kids dressed up as Teenage Mutant Ninja Turtles hold up a trick-or-treater in a pig mask for his Pokemon cards you’ll know you’re in Michigan.

Pizza gnomes lurk under the front steps and snatch pizzas from unsuspecting delivery drivers. They’re the scourge of the state, and apparently a popular costume.

Racist, but not as racially offensive as one might have expected.

So awkward when you show up to a party and someone else is wearing the same corn costume.

Instead of Halloween people in Montana save cash on costumes by celebrating Wear Your Spouse’s Clothes to Work Day.

Maybe, if Nebraska starts hitting the internet really hard, it can have something up on the map next year.

Perhaps it’s Nevada’s large population of escorts who are the ones Googling these costumes.

It’s rumored people in New Hampshire just dress up like people in Vermont, and vice versa.

Walking into a crowded costume party in New Mexico is nothing but spider legs whacking you in the face.

If only Xena: Warrior Princess would battle Donald Trump in real life.

Attending a Halloween party in North Carolina could be the closest you’ll come to meeting Jennifer Lawrence in real life.

Instead of celebrating Halloween, every October 31stthe locals like to put old shirts over tumbleweeds and watch them blow across the plains into Montana.

At this very moment, there are hundreds of people in Ohio filled with dread as they watch their significant other Google “couples costume ideas” and see the horrifying results appear on the computer screen.

The worst costume in Oklahoma has to be the Seattle Supersonics who dress up in Oklahoma Thunder jerseys.

Oregonians don’t dress up for Halloween because they’re probably getting naked. No people like to take their clothes off in public like Oregonians.

Aside from the racist Eskimo costume, everything else about Pennsylvania Halloween is pretty awesome.

On Halloween America likes to dress up Rhode Island as Delaware and almost nobody can tell the difference.

You were thinking it would be a Robert E. Lee uniform costume? Well, there are a number of confederate uniform costumes on the market, but there wasn’t enough search traffic to measure it. That’s progress

Looks like South Dakota gave up after its initial search to come up with costume ideas.

It takes a lot of Elvis Presley costume searches to beat out Las Vegas.

The funniest part about the Texas costume party is when the people wearing KKK and Nazi costumes get beat up by those in Rainbow Bright and Rainbow Dash costumes.

Not surprising that this land of Disney princesses and superheroes was named the Nerdiest State in America.

Vermont has no need to Google costume ideas. Residents simply have to choose which brother from Hansen they’re going as.

Virginia doesn’t come in first for any costume searches, but it does search for “armpit photos” more than any other state (proof).

You’ll know when a Washington costume party has gotten out of hand because the Ewoks are trying to ride the My Little Ponies.

So this is what West Virginians wear when they come down from the mountains to scare costume-less Virginia.

Wisconsin’s results provide absolute proof as to the accuracy of this data.

Halloween isn’t a big deal in Wyoming because every Friday the locals dress up as wolves and chase the antelope around.

Regardless of which state you live in, if you’re looking for a home for sale there’s no better way to find it than with Estately. Visit Estately.com to start your home search.