10 U.S. States With The Most Couch Potatoes 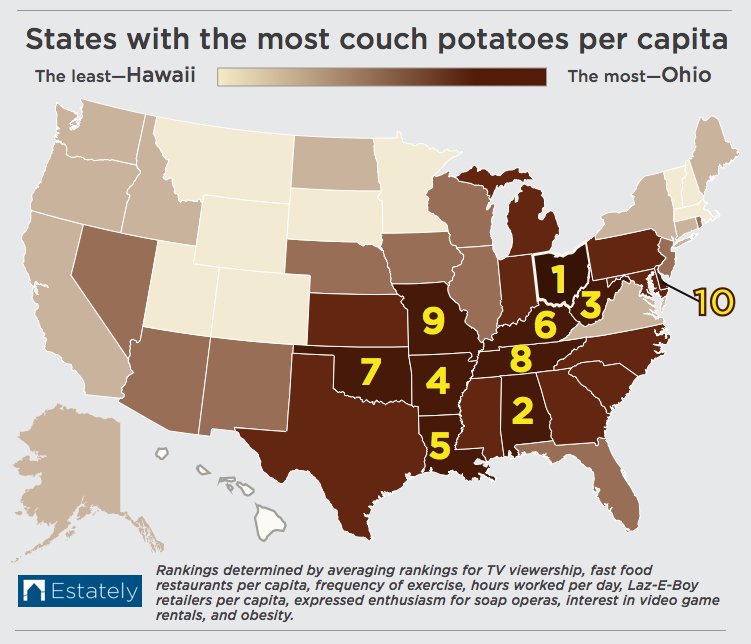 America is a land of couch potatoes. Every day millions of Americans enjoy their free time—and meal time—from the comfort of their sofas or recliners. Some play video games in homes littered with pizza crusts and empty Mountain Dew cans. Others watch daytime soap operas while digging around at the bottom of a cardboard bucket for the last, cold piece of fried chicken. All the while, thousands of unused NordicTracks slowly rust in the garage.

While this couch potato lifestyle is very much a national phenomenon, there are states where people embrace it more fervently than others. Here at Estately real estate search we ranked each state using eight separate metrics and then averaged those to create our final rankings. Couch potatoes are found in the greatest abundance in Ohio, while Hawaii is home to the fewest. 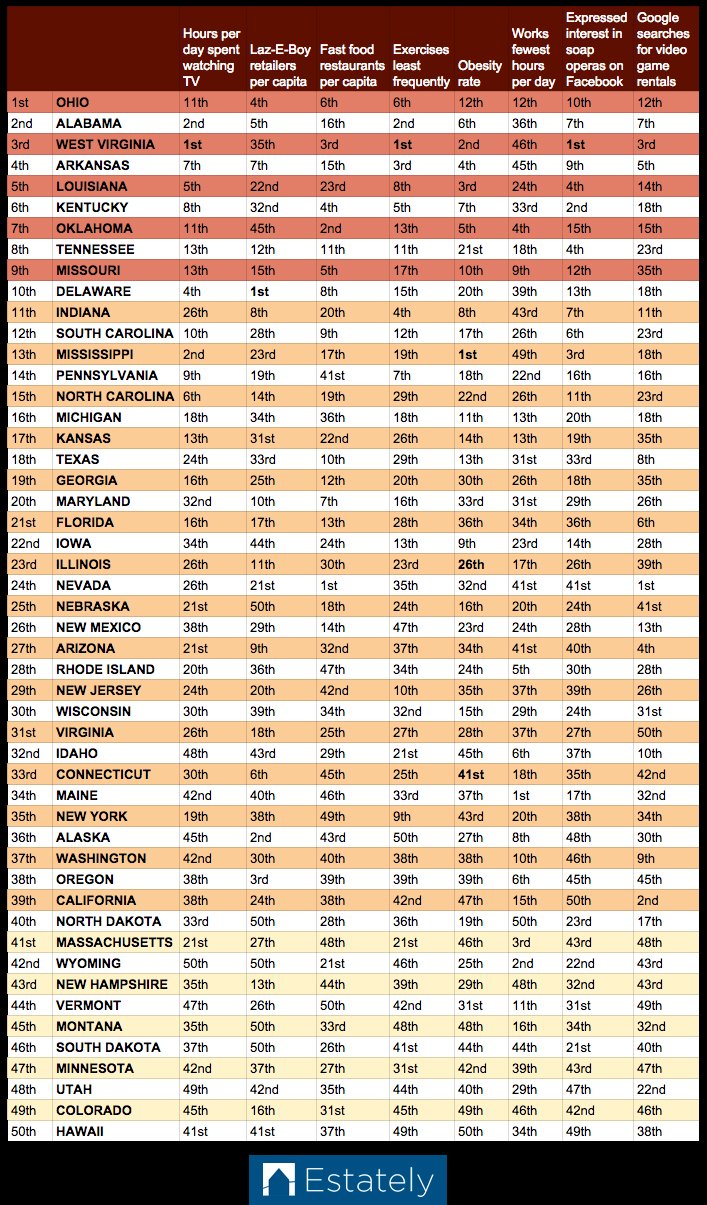 As you can see, America’s “couch potato belt” is largely made up of states from the South and the Rust Belt. To get a better picture of the geographical differences for each of the eight metrics we used check out the maps below. 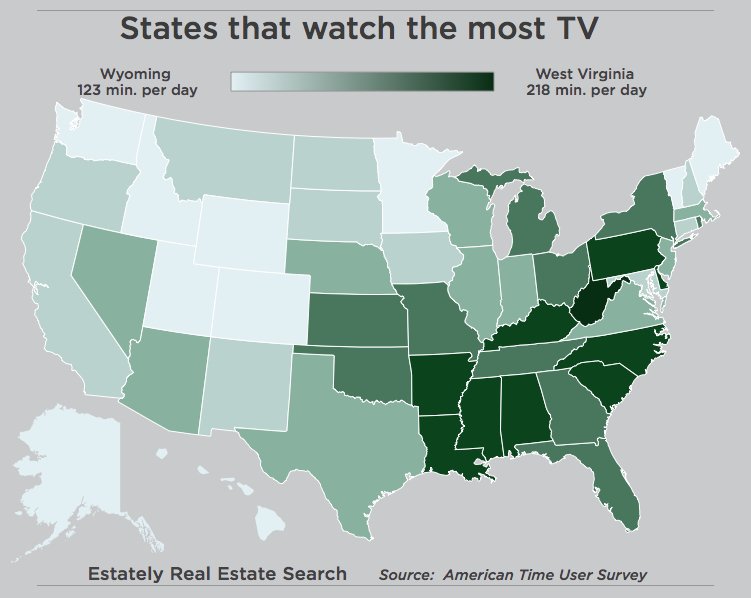 West Virginia residents have the idiot box on an average of 3 hours, 37 minutes per day, nearly double that of Wyoming. And if you think West Virginians are just watching more educational documentaries than the rest of us then the next map will shoot that theory down. 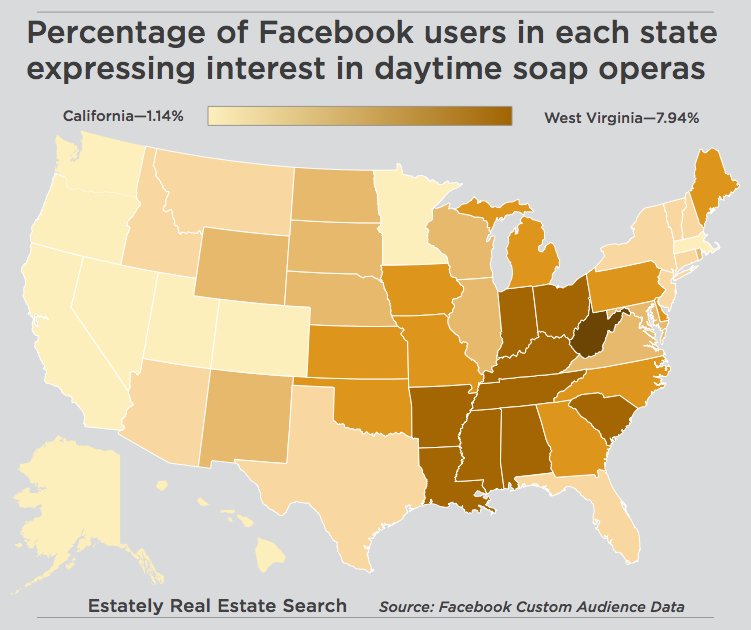 Only 1.14% of California Facebook users express interest in any of the four most popular daytime soap operas, and a good number of those may just be actors posting about auditions. A whopping 7.94% of West Virginians express interest in The Young and the Restless, The Bold and the Beautiful, General Hospital, or Days of our Lives. The Mountaineer State, it appears, just loves its stories. 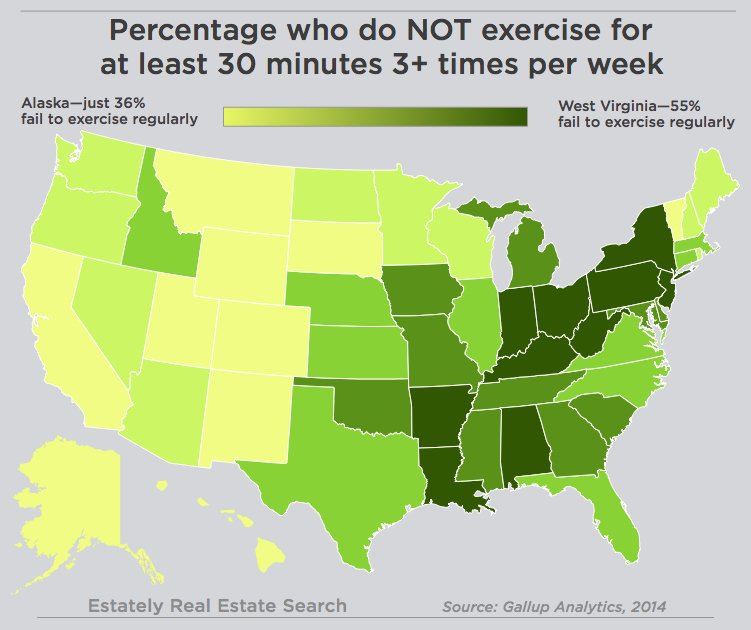 Surprisingly, people who live in a state littered with bears, volcanoes, and glaciers somehow manage to exercise with greater regularity than the rest of the country. Looking at it more closely, regular exercise seems to kind of a West Coast thing, and the rest of the country pretty much remains glued to their Laz-E-Boy recliners. 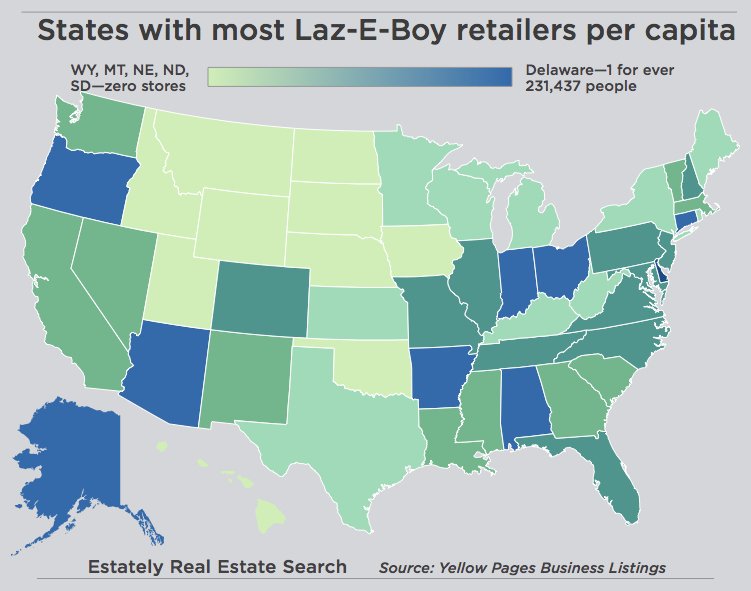 The Laz-E-Boy recliner is essentially a couch potatoes’ throne, the ideal piece of furniture for the person who wants to both sleep soundly and comfortably eat a microwaved meal in front of the TV without having to get up. Delaware wins the prize for having the most Laz-E-Boy retail locations (4) per capita of any state. Delaware also has the largest increase in obesity between 2001-2011, but for legal reasons we are unwilling to assert that those two things are related. 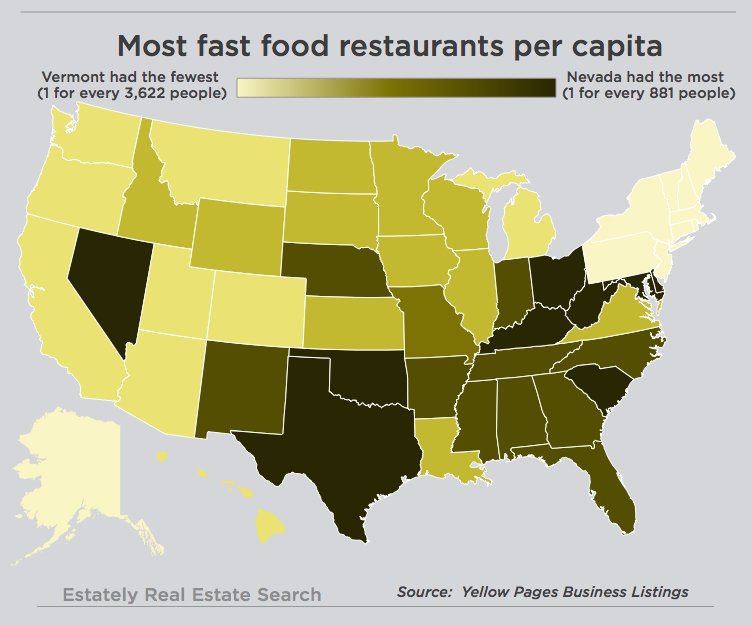 A common food staple of the North American couch potato is of course fast food. Every minute spent slaving over a hot stove is a minute not spent digging for spilled french fries between the couch cushions while binge watching old episodes of Doogie Howser, MD. Nevada has the most fast food restaurants per capita, with a single fast food restaurant for every 881 people. Vermont has the fewest—one for every 3,622 people. However, keep in mind we didn’t factor in ice cream sales in this study, and Vermont is home to Ben & Jerry’s Ice Cream. 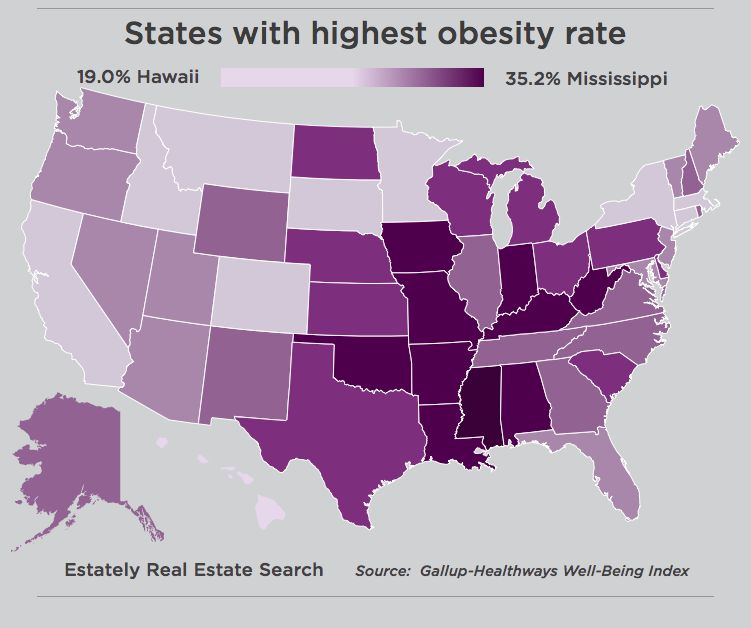 The unfortunate by-product of spending each day binge eating Cool Ranch Doritos while binge watching bad television is the inevitable obesity. And yes, storing extra calories as fat in one’s midsection does cause health problems, but all that TV watching surely has some benefits. How come doctors don’t point out that studies show those who avoid exercise to watch television are more skilled at reciting sports and movie trivia? 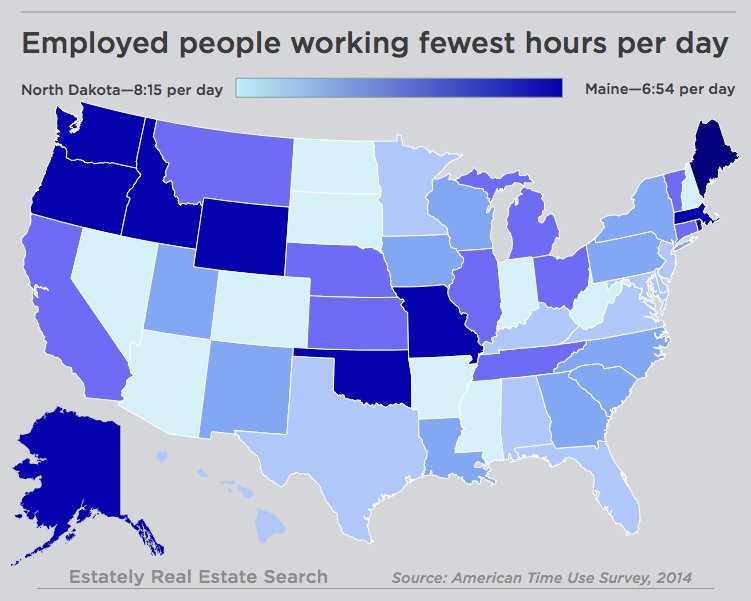 For the most dedicated couch potatoes, time spent at work is simply time not spent drinking beer on the sofa in their underwear. As you can see, employed residents of Maine have truly embraced their inner Homer Simpson by working an average of just 6 hours and 54 minutes each day—fewest in the country. Meanwhile, pet dogs in North Dakota get an extra hour and 21 minutes each day to snooze on the couch before their owners return home to kick them off. 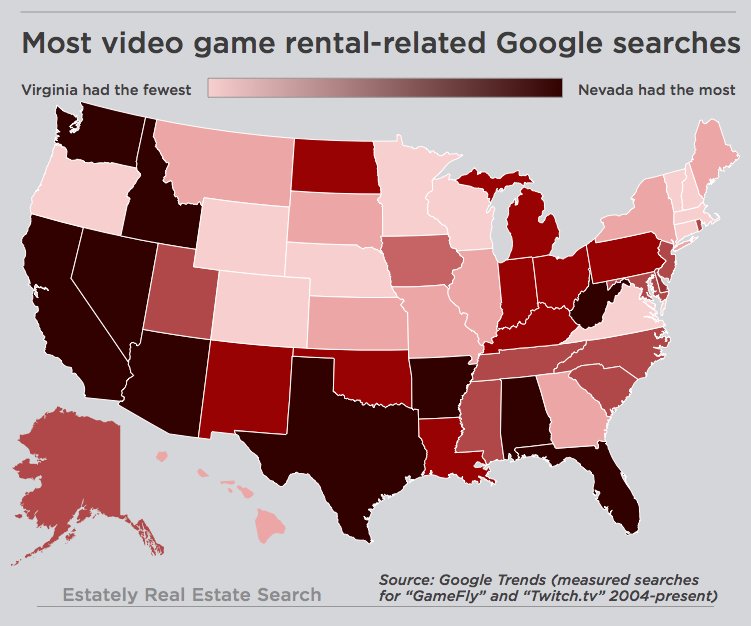 We couldn’t find any statistics on the average amount of time spent playing video games in each state, but we were able to track which states perform the most Google searches for “GameFly” and “Twitch.tv,” two popular video game rental services. According to Google Trends, Nevada was way out in front for those, while Virginia is apparently content to only play their old Nintendo NES when they visit their parents for the holidays. 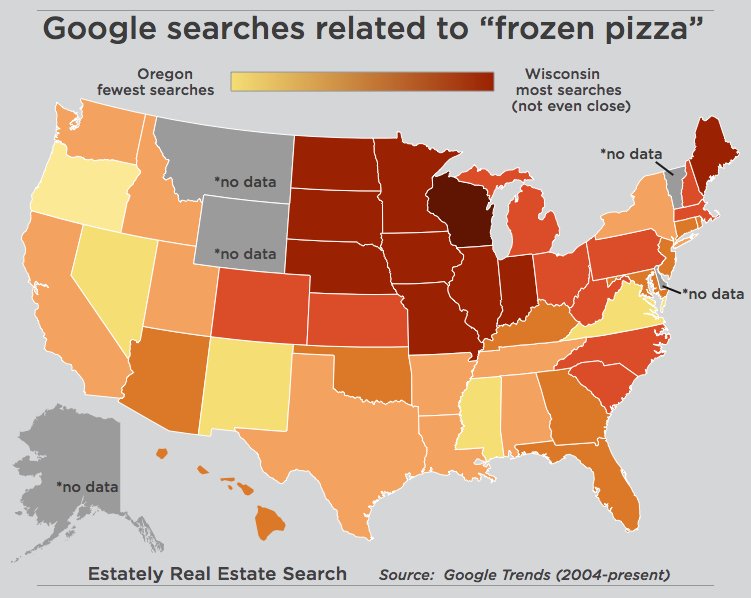 While we didn’t include this in our metrics, we were curious why anyone would need to research frozen pizza on the internet when the instructions are right on the box. Apparently, people in Wisconsin need to know more, which is why they perform the most frozen pizza-related Google searches of any U.S. state. Are they researching how to improve their frozen pizza experience? Are they looking into whether the Totino’s Party Pizza is an important part of this balanced breakfast? Do they want to know if frozen pizza is an acceptable Valentine’s Day present? It’s all very mysterious.

Are you a couch potato looking to buy a home, but don’t want to hit the pavement to look at houses? If so, then check out Estately.com, an incredible tool that allows you to search for a home from the comfort of your own couch.