Which U.S. States Have the Most Immature Men? 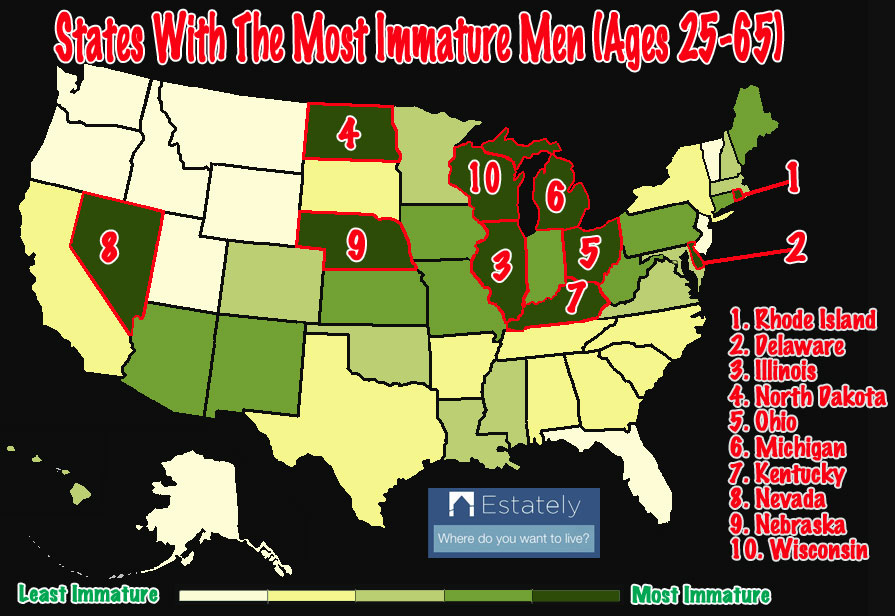 A recent Pew Research report that shows the continued decline of marriage rates has opened a debate about the decline in men who are worthy of marrying. Why are men increasingly undesirable? Experts point to a high unemployment rate among men, lower college enrollment, and an increase in the number of adult males living at home with their parents (20 percent of men ages 25-31 live at home, while just 12% of women do).

In the end, we discovered the country’s most immature men are congregated in the Midwest, Great Lakes, Southwest, and Appalachia. The most mature were in the Northwest, Mountain West, and South. 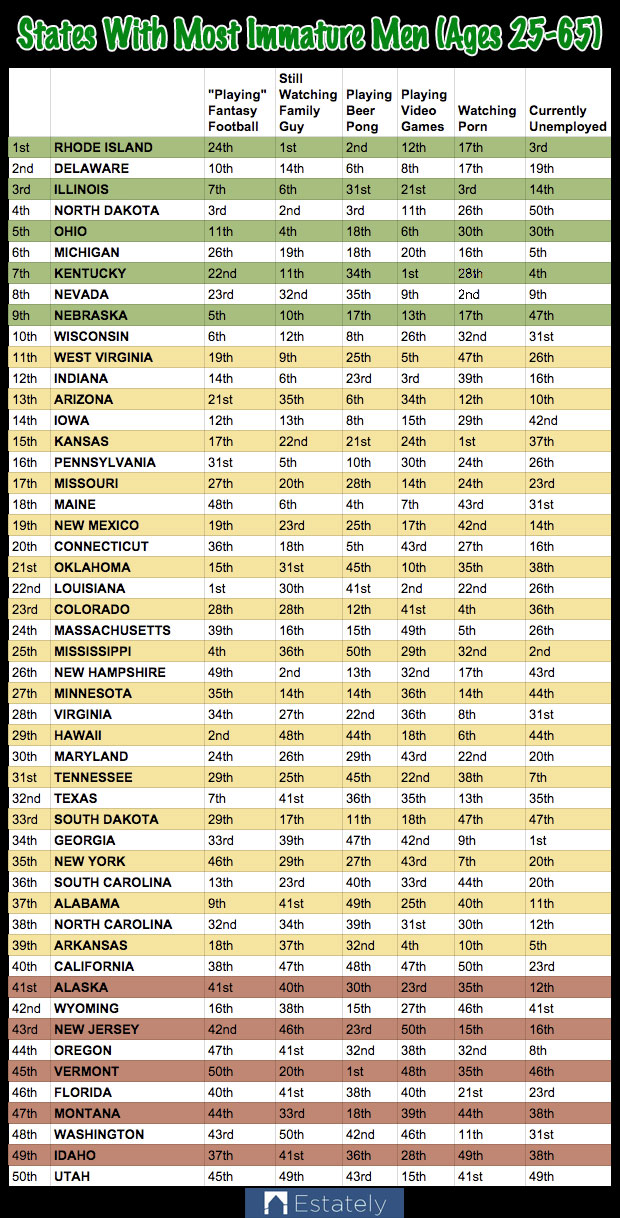 10 STATES WITH THE MOST IMMATURE MEN

It’s unfortunate that Rhode Island isn’t a real island because that could provide an excuse for the thousands of man-sized children who’ve failed to launch there. Grown men still gather around their families’ televisions to laugh at Family Guy (1st), then retreat to the basement for some fart jokes and beer pong (2nd). If you’re interested in dating single men you might want to consider a different locale (not Delaware).

This sliver of land wedged between Maryland (30th) and New Jersey (43rd) is Delaware (2nd), a hotbed for men who still sleep in their childhood bunk beds. The closest these manbabies get to interacting with eligible singles in their area is when they unwittingly open email attachments promising “lonely singles dying to meet you.” This is why their mom’s computer doesn’t work anymore. This is why you’re banned from using it for anything but job searches…

A lot of men in Illinois could have afforded their own apartment if they hadn’t spent their money on a tablet so they could update their fantasy football teams while still watching naked people frolic on their laptops. For those in Illinois interested in dating a grown man instead of a fledgling human, there’s a horrible reality they’ll need to come to terms with. Illinois is at the geographic center of male immaturity. Neighboring Indiana (12th), Iowa (14th), and Missouri (17th) offer only slightly more mature options.

Because North Dakota’s men get up and go to work every day (lowest unemployment in the U.S.) perhaps they can be forgiven for indulging in the youthful pursuits of fantasy football (3rd), Family Guy (2nd), and beer pong (3rd).

Old School was a comedic classic, however, it is not a template for how a man should actually live out his 40s. A large percentage of Ohio’s adult male population don’t think this way though. It’s something to think about the next time you yell out to a middle-aged friend, “You’re my boy, Blue!”

Is it possible the prolonged adolescence that lasts well into one’s forties is simply a learned behavior ingrained in young men who attend Big Ten schools? That would be a simple way to explain why the large swath of male immaturity that spreads out around states near the Great Lakes.

Give a man at an arcade a few tokens and he’ll play video games for a minute. Give a Kentucky man an Xbox and put it in his mother’s basement and he’ll never move out and find a job. Kentucky is tops for playing video games, and it has the fourth-highest unemployment rate. Is there a connection?

Las Vegas has long been a destination for men looking to relive their most immature party days, so it’s not surprising that many of those people end up moving there. Unfortunately, when they do they often behave like tourists, lose their jobs, and end up sitting in a dark room playing video games all day.

An average day in an overgrown boy’s life in Nebraska starts with his mom waking him up, then he kisses his high school football trophies good morning, goes to work (spends 7 hours watching Tosh.0 and searching online for new fart jokes), picks up dinner at Jack ‘n the Box, plays Madden until midnight, kisses his high school football trophies goodnight, and goes to bed and dreams about beer bonging.

Every culture has certain milestones or rituals that represent a boy crossing the threshold to manhood. Unfortunately, in Wisconsin, the widely accepted right of passage is simply when a boy defeats his older brother’s high score in Grand Theft Auto 5.

10 STATES WITH THE MOST MATURE MEN

Aside from playing video games, Utah’s male population exhibits some fairly mature traits. Sure, the state waters its beer down to the point of it being almost pointless to drink, and the marrying age is ridiculously young, but it’s still a state where sober reasoning wins out over the impulsive decisions most men left behind with puberty.

While male residents in West Virginia are still belching the alphabet to impress women, the men of Idaho are off changing the oil in their pickup trucks and never asking their moms to pay their cellphone bills.

What if America’s Western expansion was really just people trying to move away from men whose parents had deemed them too irresponsible to have pets? All Westerners aspire to have guinea pigs. There, somebody’s finally said it.

Florida’s stats are skewed because the high numbers of older men skew these stats. You’ll find plenty of immature men in Florida.

Look, when you’re the beer pong champion in college people are going to keep testing you to claim your throne and you have to defend it. Vermont maybe #1 for beer bong enthusiasm, but it’s still home to a high percentage of mature men. You know, the kind of men who put in a hard days work at the ice cream factory and then deliver a pint to their girlfriend. That’s so unlike Massachusetts where dudes text their girlfriends at 1 am to ask, “You up? I just rented a new game from GameFly. Can my buddies and I come over cuz my mom took away my Xbox?”

Oregon may not be doing so well on the job front (8th highest unemployment rate), but they’re using the extra free time to craft their own beer, not just hang out in their tree forts drinking their dad’s beer.

Looking for a mature man who won’t divorce you and never plays video games? The Garden State is producing a surprisingly mature crop of men. Take note New Yorkers.

Men in Wyoming don’t have time to watch pornographic videos on the interwebs because they have a high rate of employment and agricultural jobs that don’t allow for much free time. Or it’s because they still have dial-up internet.