So This Is What Americans Dream About 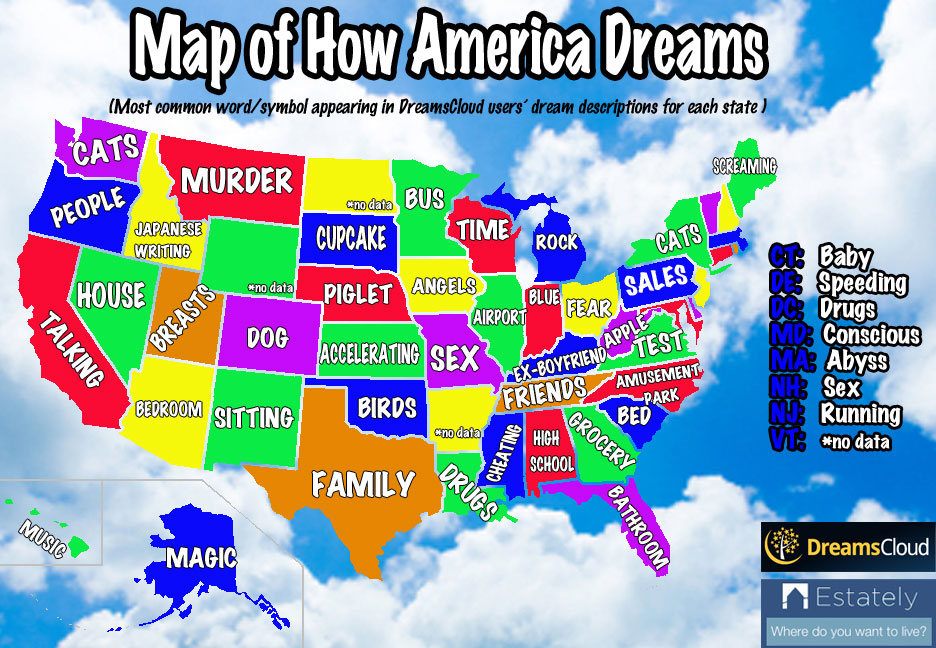 Because mapping out each U.S. state’s sordid internet search histories isn’t nosy enough, Estately teamed decided to peek at each state’s dreams by teaming up with DreamsCloud, a site that helps users find meaning and deeper understanding in their dreams. DreamsCloud analyzed the dream descriptions of users in each state and provided the five most common words/symbols that appear for each. We put the most frequently mentioned symbol on the map and listed the top five below. Estately attempted to assign meaning to the most common dream symbols for each state. Feel free to provide your own interpretations in the comments section. We’ll share the best ones on social media. And be sure to check out DreamsCloud’s Dream Dictionary for a far more insightful analysis of the meaning individual dream symbols.

Instead of reading a book before bed, residents of Alabama like to watch their Girls Gone Wild tape on VHS.

Alaska is filled with wild animals and creepy dreams.

The greatest fear for an Arizona resident is that someone will steal their phone. This could be said about everyone under the age of 40.

Perhaps people in Arkansas sleep so soundly because they never dream at all?

CALIFORNIA: talking / back / people / down / house

You know how people always say they wish they could record their awesome dreams and make them into a movie? In California their dreams are so boring they just make movies instead.

One of the worst symptoms of altitude sickness is dreaming that you’re a canine rapper dodging gunfire on your way to school.

A common fear in Connecticut is that date night will be canceled because the Sbarro at the mall is closed because of a fire.

If you’re a drug kingpin in D.C. it’s a real dream dilemma choosing what mode of transport to smuggle your goods.

It doesn’t matter if you’re at home, on a cruise ship, or hanging out with Bill Nye, the primary concern is bathroom proximity.

Selecting the wrong brand of diapers at the store can get you thrown out of the house or run out of town. THIS STATE WEARS HUGGIES!!!

Did you know that there is a shortage of garages in Hawaii and that’s why most family bands have to practice in the bathroom?

If you’re an Idaho car service driver you have a couple of real concerns: 1. Make a sign that the Japanese businessman you’re picking up at the airport can read so he knows you’re his driver. 2) Training like Rocky Balboa, which includes chugging raw eggs like oyster shooters.

Would you rather drive your girlfriend to the airport during rush hour or battle a dragon? There’s no correct answer here.

Feeling blue? Ex-boyfriend got you feeling down? Well, get ready to meet somebody new at Bear Night, the Midwest’s most exciting bear-themed bingo event.

Ever have that recurring dream that you are a WWI flying ace and you’ve stolen an airplane to fly to heaven to win the heart of a beautiful angel by presenting her with a bouquet of carnations? You would if it was 1920 and you lived in Iowa.

Kansas residents don’t get very far into the alphabet when they dream.

If you’ve lost your ex-boyfriend when he was sucked into a black hole then you only have your whiteness to blame… apparently.

The lesson here is if you’re going to do drugs and sex stuff with vampires at least travel by bicycle because of global warming, and also because you’re really high and not in the right state of mind to operate heavy machinery.

In Maine’s libraries, the collected works of Stephen King are found under humor writing, not horror.

Dream time in Maryland is basically that really cool older kid from up the street who you later learned was a total loser.

You’re a team of programmers working on a new iPhone app that can save the world from natural disasters and nuclear accidents, but can you complete your task before your alarm clock wakes you?

Imagine if instead of dreaming you just re-watched Speed (starring Keanu Reeves and Sandra Bullock) over and over. That’s real life in Minnesota.

If this were a game of Clue, a good guess would be Doctor X… in the swimming pool… with your husband?

Oddly, a Missourian’s greatest fear when attending a sex party dressed like a Disney character is bumping into an ex-girlfriend or ex-boyfriend hanging out with all his/her friends.

Sort of figured everyone in Montana just dreamed about Brad Pitt fly fishing in A River Runs Through It, but it’s actually much darker than that.

Hi, my name is Linda and my professional goals include moving to Grenada and running along the beach with my pet piglet. Here’s my business card…?

Arsonists have the bulk of anxiety-filled dreams in Nevada.

The logistics of sex are really keeping New Hampshire up at night.

New Jersey dream date: Take co-worker to a KISS concert, hold hands, kiss, and then fly away to somewhere else together in a tornado. Awesome.

Do you want to fool around in the back of a parked car? New Mexico does.

Some day, when humanity has vanished, New York will be repopulated by a large family of tabby cats.

If you’re in North Carolina at an amusement park and you experience a stomach ache it’s either bad cafeteria food or you’ve been stabbed.

Since there’s no measurable data, this is just a guess, but everyone in North Dakota dreams they’re the Highlander, and there can only be one Highlander!

Basically, Ohio residents just dream their stuck on a family road trip all night every night.

If they didn’t have families to take care of, Oklahomans would probably follow their dreams of moving to Portland, Oregon to become bird portrait artists.

Before he could say “I do” the 7-layer burrito he’d unwisely eaten started audibly rumbling in his stomach and the marriage was doomed.

A classic Philly pick-up line people dream of hearing is “Hey baby, when I’m not making sales calls while boxed in by these cubicle walls I like to strangle lions in the ocean. Can I buy you a drink?”

If you’re ever trapped on a demon-filled island with your friends it’s probably Rhode Island (*not an island).

Tessa Dee is the reigning Miss South Dakota and the state’s residents would like to buy her a cupcake.

If you’re reading this from inside an airport shuttle bus heading to a Texas airport you might want to check and see if your driver is asleep.

A common dream in Utah is that you’re back at the house, sitting on the couch, eating a chicken breast Lean Cuisine with broccoli florets and a pomegranate sauce.

When you flunk a test in dreamland in Virginia you’re letting down a lot of friends and family.

Everyone in Washington has a recurring dream in which the cat finally gains control of the laser pointer and ruins a family wedding.

For a lonely pervert, the lap dance was very enjoyable, but as a scientist, the lap dance really provided a Galileo moment in providing a great understanding of gravity.

Ever have that dream you travel back in time so you can be the first person to tell everyone about a new band called The Black Keys? That’s sad.
Don’t believe our interpretations for these states are correct? Let us know your own interpretations in the comments, and be sure to check out DreamsCloud for far better dream analysis.