Each U.S. State’s Food Preferences Based On Its Internet Search History 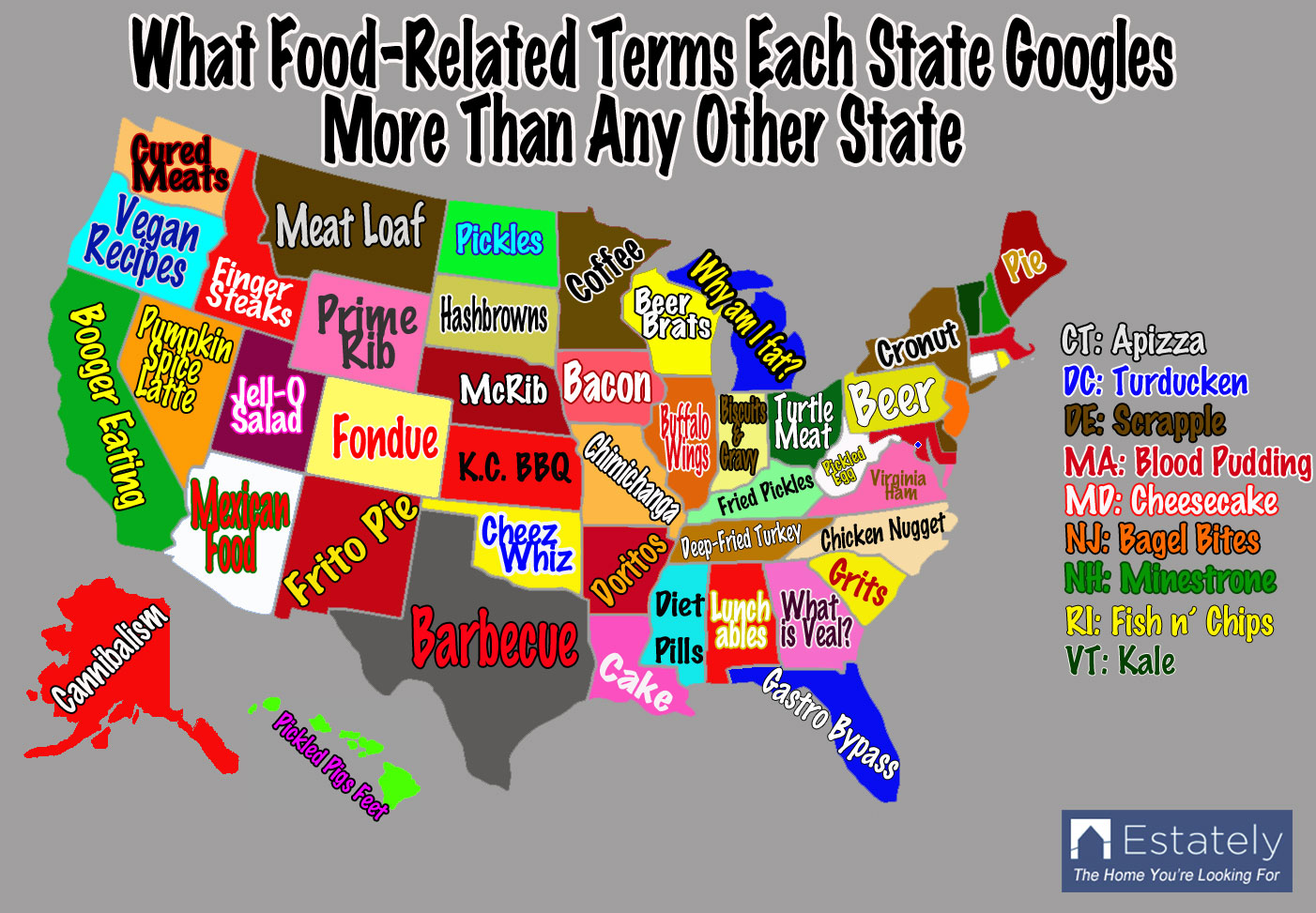 Estately ran hundreds of search queries through Google Trends to determine which food-related words, terms, and questions each state was searching for more than any other. The results weren’t entirely disturbing like our previous study of (view here) internet searches, but it did show some stark geographical differences. Some were unsurprising—Vermont is a land of granola and kale. Some raised eyebrows, like why is Alaska so interested in cannibalism? Regardless of your food preferences, this information will come in handy if you’re trying to decide which state to& buy a home in, especially for those curious about what their potential neighbors might bring to a neighborhood potluck. The results on the map above are just the tip of the online search iceberg for each state’s food interests. Check out what else residents of each state search for more than the other 49 states (and the District of Columbia) in the list below…

Analysis:  Alabama is the culinary capital of the south.

Analysis: Neighborhood cookouts take an ugly turn if the prepared food runs out.

Analysis: Arizona residents appear to be trying to even turn their sandwiches into chimichangas.

Analysis: It’s either all carbs or no carbs at all in Arkansas.

Analysis: There are thousands of California Instagram accounts featuring photos of boogers accompanied with a description that includes the term “nom nom.” You people are monsters.

Analysis: “Excuse me, Waitress? Sorry to bother you, but is the fondue gluten free? No? Oh, well then I’ll just have the pan-seared bull testicles and a Pepsi.”

Analysis: In case you couldn’t think of any other excuse not to pull off the freeway in Delaware, it’s roadside diners are full of scrapple.

Analysis: Residents at local nursing homes aren’t about to give up their delicious Cuban sandwiches.

GEORGIA:  Chicken and waffles / waffles / International House of Pancakes / Coca-Cola / What is veal?

Analysis: The chicken piccata is more popular than the veal piccata, but less popular than chicken and waffles.

Analysis: Hawaii is the top state to sample all types of Asian cuisines.

Analysis: When you’re the top supplier of french fries in the country it’s understandable that you’d start deep frying narrow strips of steak, too.

Analysis: Illinois residents only Google food terms after they’ve been drinking for quite a while.

Analysis: If you grew up on chipped beef and loose meat sandwiches you’d run away with bacon the first chance you got.

Analysis: Kansas has kind of a one-track mind when it comes to food.

Analysis: Your stomach would be upset also if you just ate your horse… and then a Manwich.

Analysis: Louisiana is very loyal to its local food traditions, but it will steal dessert recipes from its neighbors.

Analysis: ;A traditional three-course meal in Maine consists of the lobster course, the pie course, and then the dessert course.

Analysis: Maryland residents would like to expand their culinary horizons beyond local crab, but they don’t know how to use chopsticks.

Analysis: Instead of a hunger strike, the state apparently has gone on a dessert strike until McDonald’s brings back the McDLT. IT KEPT THE HOT SIDE HOT, AND THE COOL SIDE COOL!!!

MICHIGAN: Omelette / Why am I fat? (tie)

Analysis: It seems unlikely it’s from all the eggs. Maybe Michigan is just big boned?

Analysis: Neighboring North Dakota stole most the terms one would expect to see searched for in Minnesota.

Analysis: It’s just a weight roller coaster in Mississippi. First you’re too skinny so you eat pie, then you’re too fat so you take diet pills…

Analysis: In Missouri, the early bird gets the chimichanga.

Analysis: Maybe the reason everyone’s eating chicken noodle soup when they’re sick is because of everything else they’re eating?

Analysis: New Hampshire in the yin to Vermont’s yang.

Analysis: Not as sophisticated as New York’s searches, but nothing to be outright ashamed of (like NY’s “British cuisine” search).

Analysis: ;It’s projected that this year could see record Frito and shrimp harvests in New Mexico.

Analysis: Hop inside the culinary time machine that is North Dakota.

Analysis: If you had to exclude one state from the American potluck, which one would it be…

Analysis: In Pennsylvania, the food pyramid is inverted, and the triangle comes in the form of a funnel you pour beer and high calorie snacks down.

Analysis: Each home in Rhode Island comes with two deep fryers—one for desserts and one for seafood.

Analysis: All you really need to know is that “chislic” is cubed red meat that’s deep fried, flavored with garlic salt, served on a toothpick, and comes with crackers.

Analysis: Given the variety of poultry being fried in this state, it’s probably time Tennessee laid claim to Buffalo wings as well.

Analysis: You had us at “taco.”

Analysis:  Avoid choking by slowing chewing your hot pocket. It’s not a race and the Twinkies are not the prize at the finish line.

Analysis: Anyone who doubts the validity of this study had better try and explain why Vermont’s search terms are so spot on.

Analysis: Virginia does not use the internet to search for anything food related. The only reason it’s tops for “Virginia ham” is because it has its name in it.

Analysis: “Excuse me, waiter? Are the burgers hand forged or are they uniform in size? Uniform? No, thank you then.”

Analysis: “Presentation” means placing the pickled egg in the center of the Blooming Onion and lightly dusting it with Shake N’ Bake.

Analysis: There’s nothing like eating cucumber sandwiches with the crusts cut off while tailgating before a Packers game.