Is Your State a Land of Hippies or Is it Full of Squares? 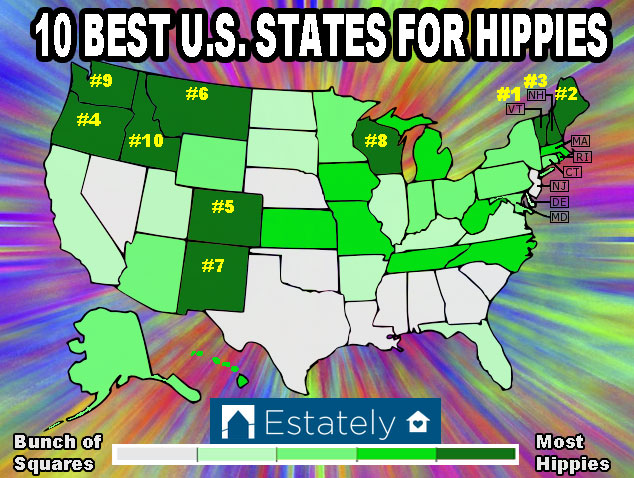 The United States of America is a far-out place, a groovy country full of all sorts of different people, but what about the hippies? Here at the venerable real estate search site Estately we sought to seek out which state is home to the largest concentrations of hippies. Since “hippie” isn’t a box you can check on the Census, we had to create a special set of criteria to determine who the hippies are and where they are located. To do this, we measured these four variables.

For these four criteria, we ranked each state (and the District of Columbia) from 1-51, with one being the most hippie and 51 being the least. In the end, Vermont was declared Hippie Heaven and Mississippi earned the title of Hippie Hell. Keep in mind that the numbers below for each category indicate the state’s rank, not its score.

Obviously, there are a few surprises with our rankings. Notably, two important states to hippie culture were in the lower half of the rankings. New York, which is home to Woodstock, came in 29th, and California came in at 32nd. As Bob Dylan once said, “the times they are a changing”, and that means hippies are getting priced out of some of their favorite places. Where should a hippie reside now that the median home price in San Francisco ($1,000,000) is equal to the cost of 1,000 used VW microbuses? Perhaps in one of the our ten most hippie-friendly states…

Profiles of the 10 Best U.S. States for Hippies

The home state of Phish, and Ben & Jerry’s Ice Cream, it’s no surprise Vermont is America’s hippie Mecca. It has the most communes (24) and co-ops (16) per capita of any state, and it has highest concentration of Grateful Dead, Bob Dylan and Phish fans. Basically, Vermont is not only a massive hippie retirement community for the original hippies, but it’s also a haven for the next generation of flower children.

If you’re thinking of selling your patchouli-scented soap in Maine you better be prepared for some stiff competition because the market is saturated. Overall, Maine residents expressed the most interest in hippie things, particularly peace (2nd), Grateful Dead (2nd), Phish (3rd), Cannabis (6th), Bob Dylan (2nd, and hippies (4th). The state is basically one big drum circle.

Some of the pot and patchouli to be smelled in New Hampshire is no doubt wafting over the border from Vermont, but The Granite State is still very much a hippie stronghold. Per capita, it has the third most Grateful Dead fans, the second most patchouli products for sale on Etsy, the fifth most co-ops, and the 7th most communes. It’s basically Vermont with deodorant on.

Much of Oregon will be shocked and insulted they aren’t #1, but before they abandon their belief in non-violence, let us explain. Oregon still sells more homemade tie-dye per capita than any other state, has the third most communes per capita, and it’s home to the city of Eugene, which holds the title of the #1 U.S. City for Hippies. Oregon remains a hippie haven, but perhaps it doesn’t let its freak flag fly as proudly as it once did.

Not only is Colorado home to legal weed, it’s also home the second-highest concentration of Phish fans in America, the eighth-highest concentration of communes, and the Jack Kerouac School of Disembodied Poetics. The question though is whether Colorado will remain a hippie state or whether its growth and changing demographics will cause it to lose its hippie cred the way California has?

The state isn’t going to change its slogan from “Big Sky Country” to “Good Vibe Country” anytime soon, but Montana has quietly become a haven for hippies. With plenty of land and a policy of leaving the neighbors alone to do whatever they want, Montana is fast becoming a destination for another wave of hippie settlers.

New Mexico has more interest in tie-dye and cannabis than any other state, it’s fifth in selling hemp products on Etsy, and it boasts a high population of hippie artists wearing turquoise jewelry. Some say you can hear the drum circles in Taos as far away as Texas.

A midwestern hippie oasis, Patchouli-soaked Wisconsin has the sixth most co-ops per capita, the 12th most communes, and the 10th most Phish fans. Wisconsin’s hippiedom extends far beyond its hippie capital of Madison, and could be spreading even into neighboring Iowa. How else can you explain why Iowa residents do more online searches about the topic of legalizing marijuana?

Residents of Washington state don’t express their hippie values on Facebook the way the other states in the top ten do, but the state is littered with communes and intentional communities (108), marijuana is legal (and plentiful), and green values are commonplace.

Honestly, this came as a surprise. We triple checked the numbers and it all adds up. Thought for sure it would be Hawaii. So confused.

Profiles of the 10 Worst U.S. States for Hippies

If you’re looking to enjoy some great Cajun food and never see some longhairs braiding a hemp bracelet in a parking lot then Louisiana is your sanctuary.

There are pockets of hippiedom in Texas, and even 75 communes and intentional communities, but the number of hippies per capita is tiny in The Lone Star State. Also, Texas has fewer Grateful Dead fans per capita than any other state.

Peace and love has never really been Jersey’s thing, and residents express little interest in anything hippie-ish on their Facebook pages.

Like Mississippi, Georgia dislikes all things hippie, but it is curious about how this whole “free love” thing works.

The odds of meeting an earth mama at the local co-op, falling in love over some steamed tofu, and then settling down together on a commune is pretty low in Alabama.

The state is known most for gambling, prizefighting, and gluttony, so perhaps it’s not surprising the hippies steer clear. Also, local Facebook users have a low interest in peace (51st) and Bob Dylan (49th).

Some say that South Carolina residents would cut down every one of their beloved palmetto trees just to spite the tree huggers and hippies in Charleston.

It came as no surprise that Oklahoma isn’t a hippie haven. After all, these are the lyrics to Merle Haggard’s famous song “Okie From Muskogee”…

Nebraska has zero communes, despises tie-dye, and offers little to the American handmade hemp products market. Those who move their are sure to wear deodorant and avoid drum circles at all costs.

Ready to move to one of America’s best hippie states? Whether you’re looking to buy a yurt off the grid or a house big enough for a commune, you’ll find it on Estately.com.