18 Things You Should Know Before Moving to Palo Alto Sunny Palo Alto, located in the heart of California’s Silicon Valley, is home to tech, brains, trees and restaurants. But is it the right place for you to live? Check out Estately’s list of what it’s like to live in Palo Alto.

You’ll Be Surrounded by Tech Palo Alto is home to a couple of small tech companies you may have heard of – Facebook, Google and Hewlett Packard just to name a few. If you want to work a tech company and want to live near where you work, Palo Alto is a good place to be. Palo Alto is home to Stanford University and if you live here, some of the most educated people in the country will be walking all around you. Sure, everyone knows that Stanford boasts some pretty impressive graduates who have accomplished some really impressive things. But the most amazing thing about Stanford University is that it has a 24 hour espresso machine. So if you live or work on the Stanford campus or know someone who does, your dreams have come true. Living in a city where you can indulge a 4A.M. espresso craving should be reason enough for you to move here.

Everyone’s Got an Opinion on the Best Coffee All that studying and tech worked is helped by high-quality caffeine. If you ask for opinions on where to get the best coffee you may get conflicting answers. Some people will say Cafe Venetia on University Avenue and some will suggest the Coupa Cafe (so popular with techies that the film the “The Social Network” featured their mugs in some scenes) or Philz Coffee. You’ll just have try them all for yourself and decide for yourself. Yup, you read that right. There are no parking meters in the California Avenue business district of Palo Alto, and all municipal parking lots and multi-level parking structures in that area are free for the first two hours (on the street) to three hours (in indoor garages) on weekdays between 8am and 5pm. Palo Alto has a pleasant-year-round Mediterranean Climate and enjoys a “let’s-drink-a-margarita-on-the-patio” warmth for most of the year. Palo Alto gets 261 sunny days per year. The summers are warm and dry while the winters are cooler and wetter. In the summer months, the sun sets and the fog rolls over the foothills to the west, covering the sky with a heat-trapping fog blanket.

Due to the Santa Cruz Mountains to the west, Palo Alto is in a “rain shadow” (meaning that since it’s on the leeward a.k.a. downhill side of the mountain) in Palo Alto, resulting in an average annual rainfall of only 15.32 inches. With a high of 78 degrees in July and a January low of 39 degrees, you’ll be comfortable and neither sweating nor shivering for much of the year. Fresh produce to California is like pizza is to New Yorkers. Get your fruit and veggie fix at the Sunday Farmer’s Market on California Avenue. Four blocks long and chock full of vendors, it’s one of the biggest in Northern California. It’s so popular that there’s a long waiting list of vendors waiting to snag a coveted spot here. An added bonus? Free parking. So you can bring your car and load up on kale, avocados and beets. 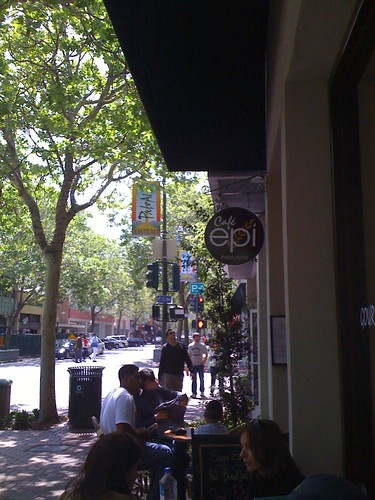 Contrary to what you may think about most parts of California, it does have many walkable areas where you get by just fine without a car. Downtown Palo Alto is one of them. However, beware if you’re used to big city living – Palo Alto’s downtown area is only 10 – 15 blocks long. Palo Alto has lots of bike lanes (called “Bike Boulevards”), making it great for cycling. Unlike hill-ier parts of Northern California (San Francisco, we’re looking at you!), Palo Alto is flat and makes for a pleasant ride that won’t leave you gasping for breath.  9.5% of Palo Alto residents cycle to work – more than any Bay area city and the third highest in the entire country (Palo Alto was beat out only by Davis, CA and Boulder, CO).

Since 2003, Palo Alto has received a “Gold” level status from the League of American Bicyclists for being a Bicycle Friendly Community. The rating is based on The Five E’s: Engineering, Education, Enforcement, Evaluation and Planning and Encouragement. The Palo Alto Unified School District has quite the reputation for being a stellar school system. Both Palo Alto High School (affectionately known as “Paly”) and Gunn High School are consistently given high rankings by U.S. News and World Report. The district has some of the highest standardized test scores in the state, and 89% of students go on to graduate from college. With an average class size of 17 it’s ensured students will get a personalized experience.

Trees Everywhere – Including the Name “Palo Alto” means tall tree in Spanish and the town was named after a 110 foot, 1,110 year-old redwood tree called “El Palo Alto”. The city is filled with tree-lined streets, thanks to 1890s tree advocates who planted the native oak trees that make up the city’s “tree canopy”. Today, Palo Alto has about 36,000 urban trees that are owned and cared for by the city. It’s kinda like living inside a park. Despite all the posh homes and restaurants that fill Palo Alto, it does have more down-to-earth recreational activities, like dive bars. Antonio’s Nut House is as divey as they come, boasting a ‘70s arcade game, foosball, air hockey and free peanuts. It’s a “lets throw the peanut shells on the floor” type of dive bar. But the true star of this bar is the fake gorilla in a cage who dispenses the peanuts. If that’s not enough reason to move to Palo Alto, I don’t know what is. If you’re looking for a suburban feel, rather than a gritty urban experience, Palo Alto could be a good fit for you. It has big city amenities, like great cafes and upscale restaurants, but has more of a sprawling, suburban feel than a city like San Francisco. This is due in part to the more spread-out geography and also the fact that there’s not a ton of nightlife options (mechanical gorilla notwithstanding). You know that adorable burning log video you see around the holidays? Well, the original version was filmed in New York’s Gracie Mansion. And when the video was re-filmed in 1970, it was shot at a home in Palo Alto. The Winter Lodge is the only permanent ice-skating rink west of the Sierra Mountains. The lodge has a fireplace so you’ll get all the benefits of a cozy, East Coast skating lodge – but without having to withstand toe-numbing temperatures. The drive to San Francisco is only 45 minutes – technically. But if you’re stuck in heavy rush hour traffic, your commute could be up to an hour and a half. And unfortunately, rush hour is from 7-10 a.m. and 3:30-7 p.m. Palo Alto has a commuter train that runs to San Francisco (and other cities in Silicon Valley). The ride on CalTrain takes about an hour and you’ll have the chance to read or get some work done (assuming you don’t need wi-fi). To see a map of home prices by CalTrain stop click HERE.

Finding a home in Palo Alto is easy on Estately.com or with the Estately iPhone App. Download it for free today!